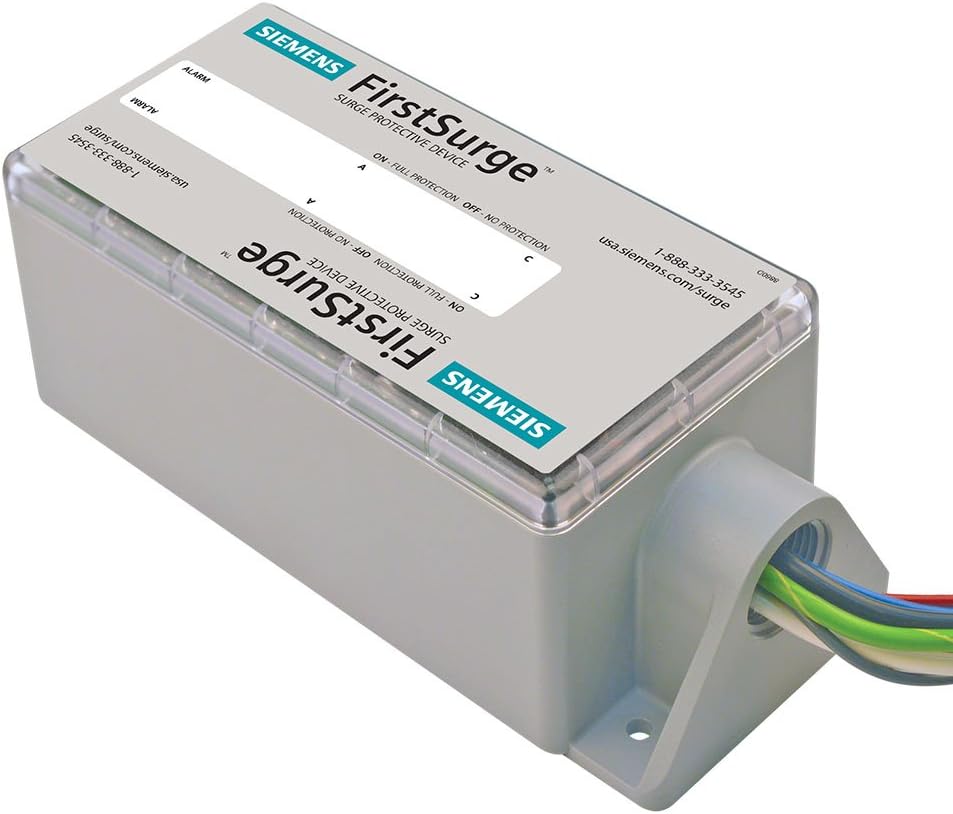 If you take one thing away from our review of the Siemens FS140, you should know this – this surge protector far surpasses the competition for a price that won’t break the bank for most homeowners. This model’s over-performance starts with its MSCC rating, which clocks in at a massive 140,000 volts. The Siemens FS140 continues to exceed expectations from there, by providing all four major modes of protection (L-N, L-G, N-G, and L-L) while still managing to only cost a bit more than $200.

Don’t let that slightly higher-than-average price tag scare you, though. You get your money’s worth as soon as you install the Siemens FS140. That’s because this model (as well as others in the FirstSurge line of surge protectors) makes use of a reengineered alert system that will clearly indicate when a problem has occurred within your home’s electrical grid. These notifications will be signaled through audible alarms and a series of color-coded lights, with each set of sounds and lights representing just one type of notification or warning.

Though few other models in its class can even dream of it, Siemens is proud to say that their FS140 model has been rated for full compatibility with 120/240 split phase panels. Better yet, this model has been explicitly designed with broad load center installation in mind. Should you choose to install the Siemens FS140 outdoors, you can even feel confident that it will operate successfully throughout its extended lifespan due to its use of Type 4, outdoor-grade enclosure.

Though it has become a standard across all Siemens brand surge protectors, we would be remiss if we did not mention this model’s excellent 10-year warranty. Not only does this warranty provide you with the ability to obtain a replacement in the first decade of its use in your home, but it also provides provisions to cover any of your in-home electronics damaged due to full-scale unit failure.

Read more about our how our ratings broke down for the FS140 below or checkout how it compares to other whole surge protectors.

Why Did It Earn this Score? – For a unit that promises a 140,000 amp MSCC, we would usually expect MCOVs to clock in at least a little bit higher than 100,000 amp MSCC units. But instead, the Siemens FS140 holds to this lower standard and still manages to make productive use of it. Accordingly, expect this model to reliably provide MCOVs of 150 volts when the model is in L-N, L-G, and N-G modes, while also provide a 300-volt option for the unit’s L-L mode.

Why Did It Earn this Score? – This model’s several VPRs are actually very well-suited to its architecture, as evidenced in its use of a 600-volt VPR for L-N, L-G, and N-G modes. Meanwhile, users who want to make the most of their surge protector will be able to attain up to 900 volts of protection by flipping this unit into L-L mode. In either case, you may be entirely surprised to learn that current users of this model have actually exceeded these caps without decreasing their unit’s ability to shunt a surge.

Why Did It Earn this Score? – As with other surge protectors in the FirstSurge line of products, we couldn’t be more pleased to learn that the Siemens FS140 provides all four major modes of protection. Accordingly, novice and experienced surge protector users alike will be able to adjust this model to meet their individualized surge protecting goals. This model’s owner’s manual even provides specification breakdowns for L-N, L-G, N-G, and L-L modes, thus ensuring that you’ll always know how efficiently your particular unit is operating.

If you’ve considered adding the Siemens FS140 to your home’s electrical grid, then you’ve almost certainly noticed that Siemens also makes a very similar model with many of the same features and specifications – the Siemens FS100. In fact, the Siemens FS140 and FS100 are both parts of the same line of consumer-grade surge protectors, known as FirstSurge. Due to various innovations in surge management and user interfacing, all of the models in this line are considered the very best in today’s market.

That being said, there are some worthwhile distinctions between these two models that prospective buyers should take note of. At a base level, for instance, the Siemens FS140 was designed larger homes due to its capacity to manage a surge of up to 140,000 amps. The Siemens FS100, on the other hand, is better suited for use in mid-sized homes because of its capacity to protect against up to 100,000 volts.

Also, the Siemens FS140 and the FS100 can be easily distinguished based upon their respective price tags. When purchased from a certified online retailer that offers affordable shipping options, the Siemens FS140 typically costs just over $200, while the FS100 from the same online retailer costs a bit under $200. In both cases, these surge protectors are a great value that packs a lot of high-end components and features into a single, compact form factor.

While you are shopping for a new whole-home surge protector, you should keep an eye out for high marks in some of the following specifications.

Naturally, you’ll want to isolate those units which provide a “maximum continuous operating voltage” (MCOV) appropriate to their size. This core specification describes the upper input threshold that a surge protector can withstand at one time without heating rapidly or outright catching fire. Most experts recommend that you seek out a surge protector that can provide between 15%-25% more voltage management potential then your existing in-line surge protection systems.

If you have any electric-powered appliances in your home that must remain running, even when a surge takes place, you should take note of an individual model’s “voltage protective rating” or VPR, for short. This specification describes how much power a surge protector will let through while a surge event is taking place. In turn, all extra power within the surge that exceeds the VPR will be shunted away.

Finally, you’ll want to pick out a surge protector that is built to withstand the environment in which you intend to install it. Naturally, this means that you should pick out a model with an enclosure rated for either indoor or outdoor installation. That being said, those who want to be doubly sure of their surge protector’s durability should also look into its operational temperature range to ensure that their environment’s conditions (particularly those outdoors) will not exceed its parameters.

Though it goes without saying at this point, the Siemens FS140 is fully worth every penny you pay for it. This model takes the best features of its industry-leading product line and brings out its full potential by utilizing them in a unit that can protect your home from a power surge of up to 140,000 volts. With a 10-year warranty tacked on, you’ll certainly be able to count on the Siemens FS140 to perform its singular task without complaint for well over a decade.

Also, the Siemens FS140 is certainly the go-to surge protector choice for large homeowners across the United States. You can search across the internet all you want, but you’ll be hard-pressed to find a more affordable, more productive option for your big home then the Siemens FS140.