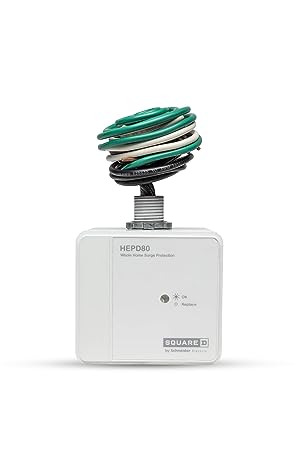 Maybe your home has fallen victim to a major electric surge in the past or you live in a region were lightning strikes routinely target ground-based entities. Either way, the risk of an in-home electric surge can be serious for many American homeowners, especially as more and more of our critical in-home facilities become reliant on electricity. Regardless of where you live or your prior experiences with whole-home surge protection, the Schneider Electric HEPD80 will surely be the active solution you’ve been searching for.

What makes the Schneider Electric HEPD80 so useful to large and mid-sized homeowners? Well, to start with, the Schneider Electric HEPD80 utilizes a NEMA 4X rated enclosure that is both ultra-durable and able to resist environmental temperatures between -31 ̊ F and 149 ̊ F. As such, homeowners living at altitudes up to 12,000 feet above sea level can invest in this model and know that it will operate as promised throughout its decade-plus expected lifespan.

While its exterior is certainly a prime feature, it’s what’s inside the Schneider Electric HEPD80 that really counts. When it is properly installed, this Type 1 unit is able to suppress up to 80,000 amps of surge electricity, which is a remarkable feat for such a compact unit. Much of this unit’s core surge management capabilities derive from its use of individually fused MOVS, each of which includes thermal and overcurrent fusing to enhance their overall reliability and responsiveness during surge events.

When it comes to user interfacing, the Schneider Electric HEPD80 still manages to show that the industry average is beginning to lag behind. In fact, the engineers at Schneider Electric have actually equipped the HEPD80 with one of the brightest green LED indicators we’ve ever seen. Based upon their estimates, this LED indicator is 8x brighter than previous iterations, thus allowing a user to clearly see when the unit is active from a far distance away.

Finally, you can count on the Schneider Electric HEPD80 to live up to its advertised specifications because it carries three major certifications from Ul, cUL, and CSA, respectively. That includes for this model’s 5-year, $50,000 downline warranty, which numerous users have successfully activated when their Schneider Electric HEPD80 unit was pushed beyond its limit by a monumental power surge.

Read more about our how our ratings broke down for the HEPD80 below or checkout how it compares to other whole surge protectors.

Why Did It Earn this Score? – When it comes to MCOVs in a modern whole home surge protection device, options between 150 volts and 300 volts tend to suffice well. Fortunately, the Schneider Electric HEPD80 provides those two precise options between its L-N and L-L modes, respectively. However, Schneider Electric has surprisingly left MVOCs for its L-G and N-G modes, requiring prospective HEPD80 users to purchase the device and test it for themselves if they hope to use either of those modes in the long-term.

Why Did It Earn this Score? – If you’ve ever purchased a whole home surge protection device before, you know how disappointing it is when it only comes with two different VPRs between its four modes of protection. It would appear that the engineers at Schneider Electric had heard the feedback decrying this undesirable lack of functional options because the HEPD80 includes three differentiated VPRS at 600 volts (L-N and L-G), 900 volts (N-G), and 1,000 volts (L-L). Each of these options will more than suffice a small or mid-sized home’s electricity needs in the midst of a surge event.

Why Did It Earn this Score? – The Schneider Electric HEPD80 makes use of all four major modes of protection, which is a welcome change from some of this manufacturer’s less capable offerings. That being said, prospective users of this unit will be able to choose between L–N, L–G, L–L, and N-G modes, thus ensuring that they always have enough functional customization options to meet the unique surge protection needs of their whole home.