The COVID-19 pandemic saw both property owners and renters experience significant changes, but there are already signs of recovery in 2021.

In 2019, 66% of Americans indicated they could pay all their bills on time

63% of homeowners and 31% of renters had savings enough to tide them through a 3-month emergency.

In 2018, HUD spending on rental assistance topped $40 billion, with 4.6 million program recipients, yet nearly 75% of the 18 million eligible households in the US did not receive rental assistance.

The housing shortage prior to the pandemic disproportionately affected extremely low-income households, with only 7.4 million rental units in the U.S. available for rent at prices that the 10.8 million households in that category could afford.

By 6 March 2021, 80.4% of renter households in professionally managed apartment units had fully or partially paid their rent, a 4.1% decrease from the number of households who paid rent that week the previous in 2020.

64% of renters had moderate to high confidence they could afford the rent in March 2021:

Among the 11% of renters who had no confidence they could afford rent in 2021:

Applications and move-ins rapidly began to decline as COVID-19 took hold in early 2020:

Entrata began offering self-guided and virtual tours of apartments in July 2020. By March 2021:

For the most part, rental occupancy has not decreased during the pandemic for most apartment properties. In February 2021, occupancy was at 94% compared to 93.4% in February 2020.

Since the pandemic, renters have been reluctant to commit to long-term leases. In February 2021, lease renewals had dipped to 43% from 56% in February 2020.

The percentage of renters remaining in month-to-month leases after a lease had expired was at 7.7% in February 2021 compared to 6.8% in 2020

The number of resident service requests declined 56% in April 2020 compared to the previous year.

Before the coronavirus pandemic, the average number of eviction cases in the U.S. was 3.7 million. During the pandemic, the protections put in place for renters have prevented at least 1.6 million eviction filings in 2020 and into 2021.

The CARES Act was a moratorium on evictions for properties that are financed by federally backed mortgages, federally assisted housing, properties participating in Low-Income Housing Tax Credit (LIHTC), and other federally-subsidized rental and voucher programs. This did not offer protections to renters living in properties not affiliated closely with government funding or programs.

After the CARES Act moratorium expired on July 24, 2020, the rate of evictions remained 74% lower than the same time period in 2019.

The Centers for Disease Control and Prevention CDC issued an order prohibiting evictions of eligible renters, and on March 31, 2021, announced an extension of its eviction moratorium, with various government entities including the Consumer Financial Protection Bureau and Federal Trade Commission enforcing penalties against landlords that violate the order.

After the CDC’s eviction moratorium was issued, the rate of evictions began to increase again but still remained around 50% lower in December 2020 than the same period in December 2019. The moratorium did not automatically protect renters, who were required to provide a declaration form to their landlord asserting eligibility for protection from eviction. Lack of outreach and communication has led to higher eviction rates.

The GAO (Government Accountability Office) found that even with the moratorium, many eligible renters were not accessing protections given them under the moratoriums.

The eviction moratorium was found unlawful in a U.S. District court, and while the decision is under appeal, the extension may not apply to National Association of Home Builders (NAHB) members. NAHB encourages its members to pursue funding through the Emergency Rental Assistance Program given to states before beginning eviction proceedings on tenants. Over $46 billion was given to local government and state housing agencies and landlords are encouraged to seek access to this funding to offset financial hardship experienced during the pandemic.

In March 2021, 1.2% of renter households in the U.S. indicated their rent payments were being or would be deferred.

An additional $25 billion (Emergency Rental Assistance) was directed to fund eligible state and local grantees to be paid directly to property owners and utility providers, and for households experiencing housing instability. The Treasury has indicated that prioritization should be given to Households at or below 50% of the area’s median income.

A survey of 2500 tenants in February 2021 found that housing vouchers have helped both tenants and landlords:

In December 2020, 211,919 renter-occupied housing units were occupied by households that were not paying rent.

Less than half (47.6%) of renters felt it was not very likely or not likely at all that they would be evicted within the next 2 months:

Over half (52%) of renters felt it was somewhat to very likely they would have to leave their home due to eviction within the next two months. Among these renters:

1,683,990 renters felt it was very likely they would be evicted within 2 months: 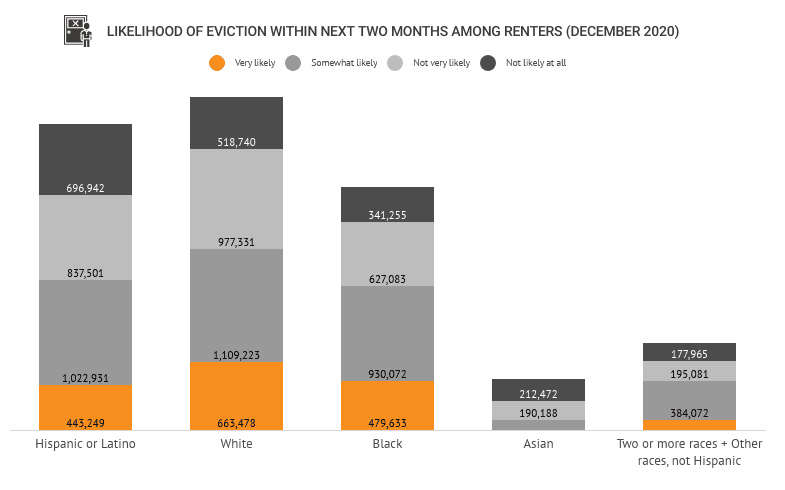 Other changes had rocked the rental market nationwide:

As of March 2021, 44.2% of renters had high confidence they could pay their next month’s rent, compared to 11% who had no confidence that they would be able to pay.

Over half (50.7%) of renters felt it was not very likely or not likely at all that they would be evicted within the next 2 months:

Less than half (48.4%) of renters felt it was somewhat to very likely they would have to leave their home due to eviction within the next two months. Among these renters:

1,405,765 renters felt it was very likely they would be evicted within 2 months: 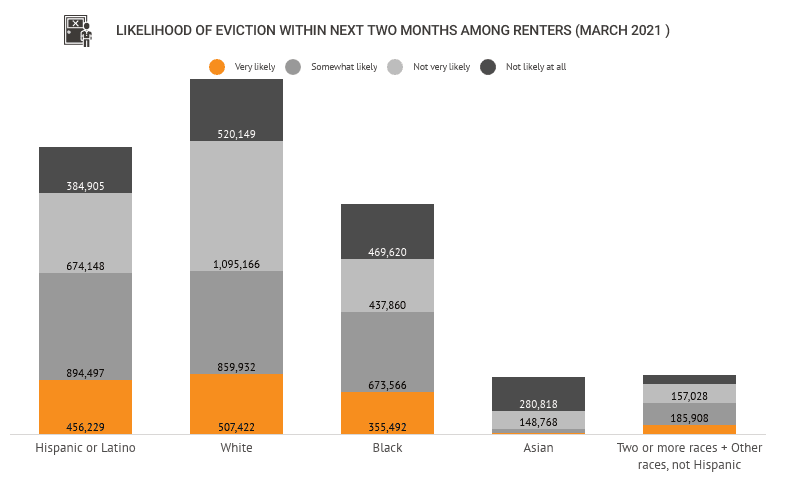