Smart home technology can make your home life easier whether you are sitting at the airport about to board an international flight wondering if you turned off the iron or just curled up in bed and not feeling motivated enough to get up and be productive. A smart surge protector offers convenience and energy savings from utilizing smart technology to automate your home. 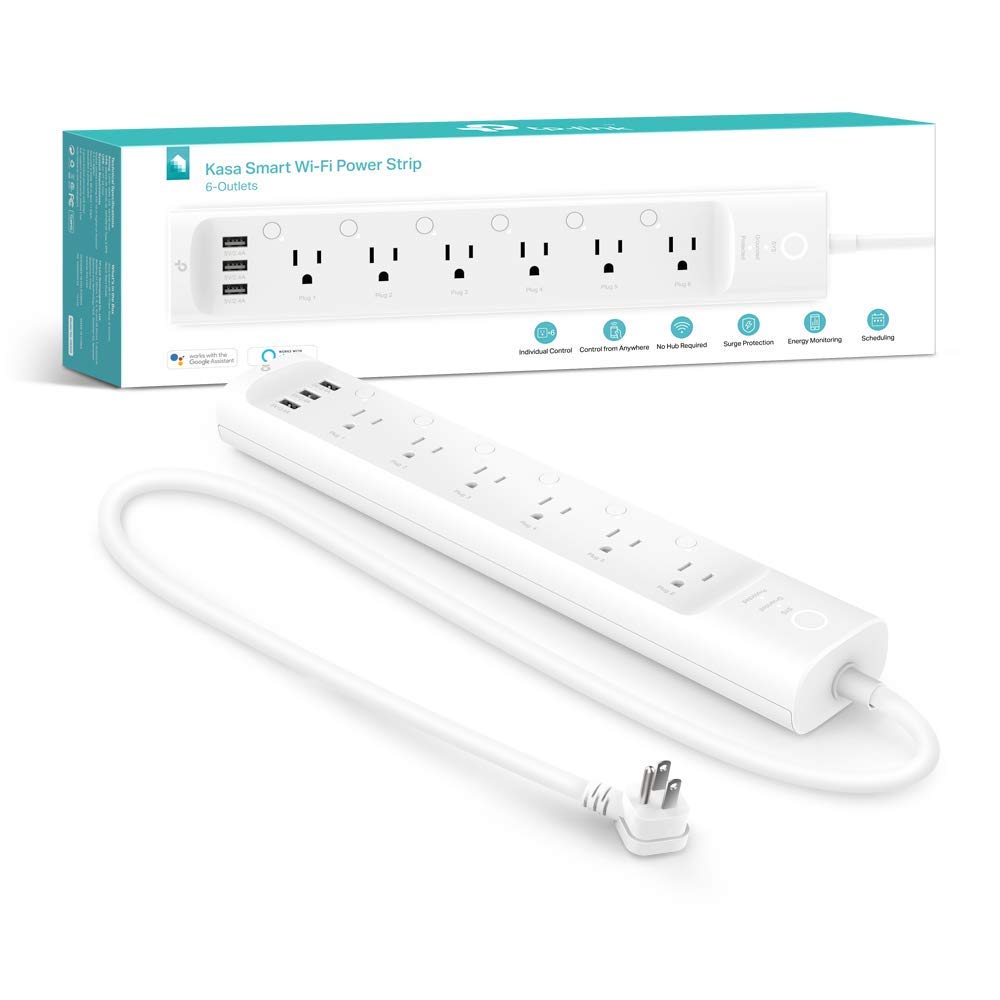 This unit is in the higher price range but has many features not available on similar products. Each outlet is programmable (you name each one) and has its own LED light. Additional protection status and grounding indicator LED lights are also easily visible. We like that there’s a countdown for turning off each outlet in the event you didn’t mean to turn it off. Each outlet has to have its own “schedule” or settings and each must be programmed individually, although you can group together devices, such as the lamps in your living room. If this one is a little too robust for you or you need the outdoor capability, KASA also makes an outdoor plug unit that also offers surge protection with just two outlets. 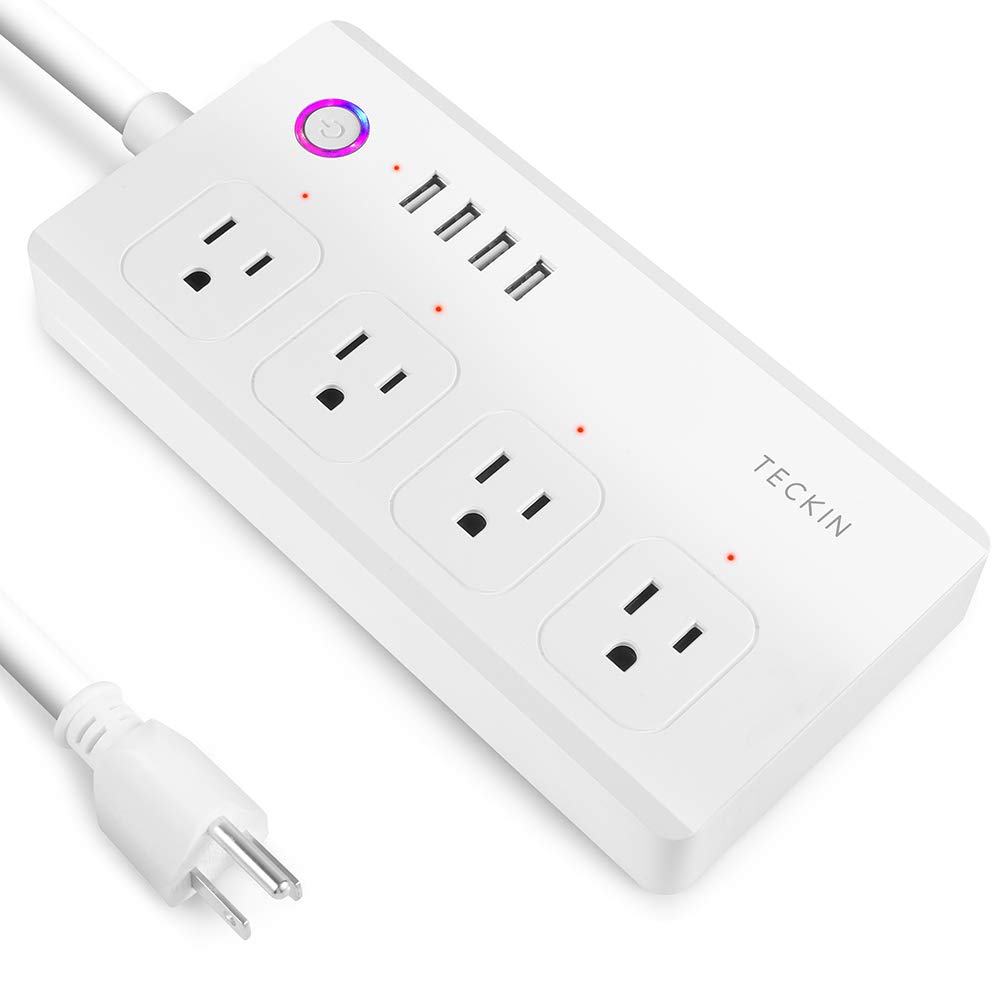 We like the affordability of this unit but were frustrated that you cannot control the USB ports separately. The corresponding app for it is difficult to use and has issues. This would be a good unit for controlling one “scene” such as the lighting in one room where individual control is not a problem. It has some serious issues connecting with some networks and troubleshooting is a long and frustrating process. Definitely not recommended for higher-end electronics, especially considering there is no warranty for if this one fails. 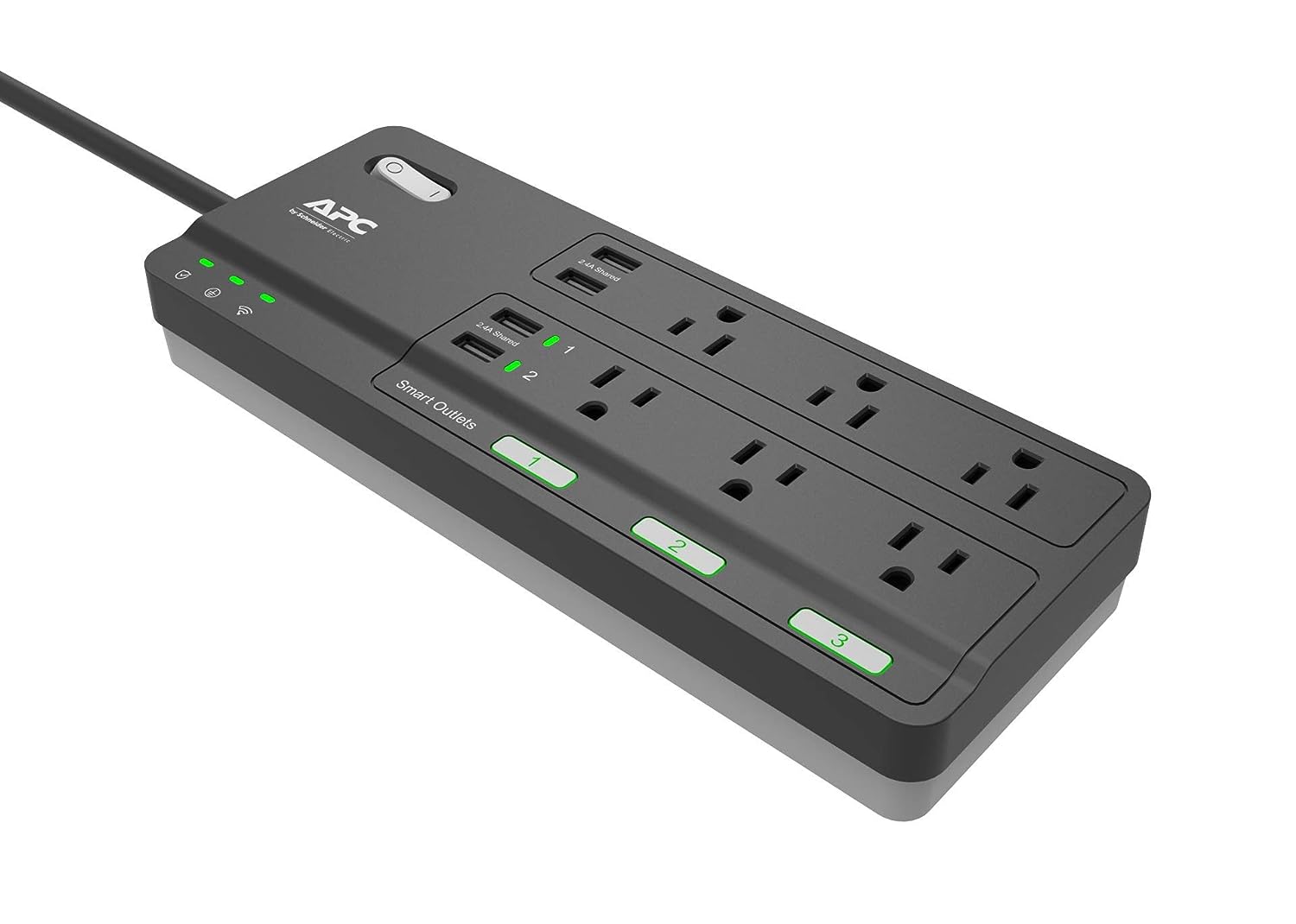 This is a versatile unit. We love that half the outlets/USB ports are not “smart,” because it allows the option to have devices that need to be powered on all the time plugged in alongside your smart devices that you do want to control. However, this unit is encountering a few growing pains. The app could use some improvements because prior versions did not allow scheduling and it seems the developers are still working out this feature to work reliably. If the number of outlets with smart capability is not a dealbreaker, this is a great option with a good warranty and good customer service from Schneider. 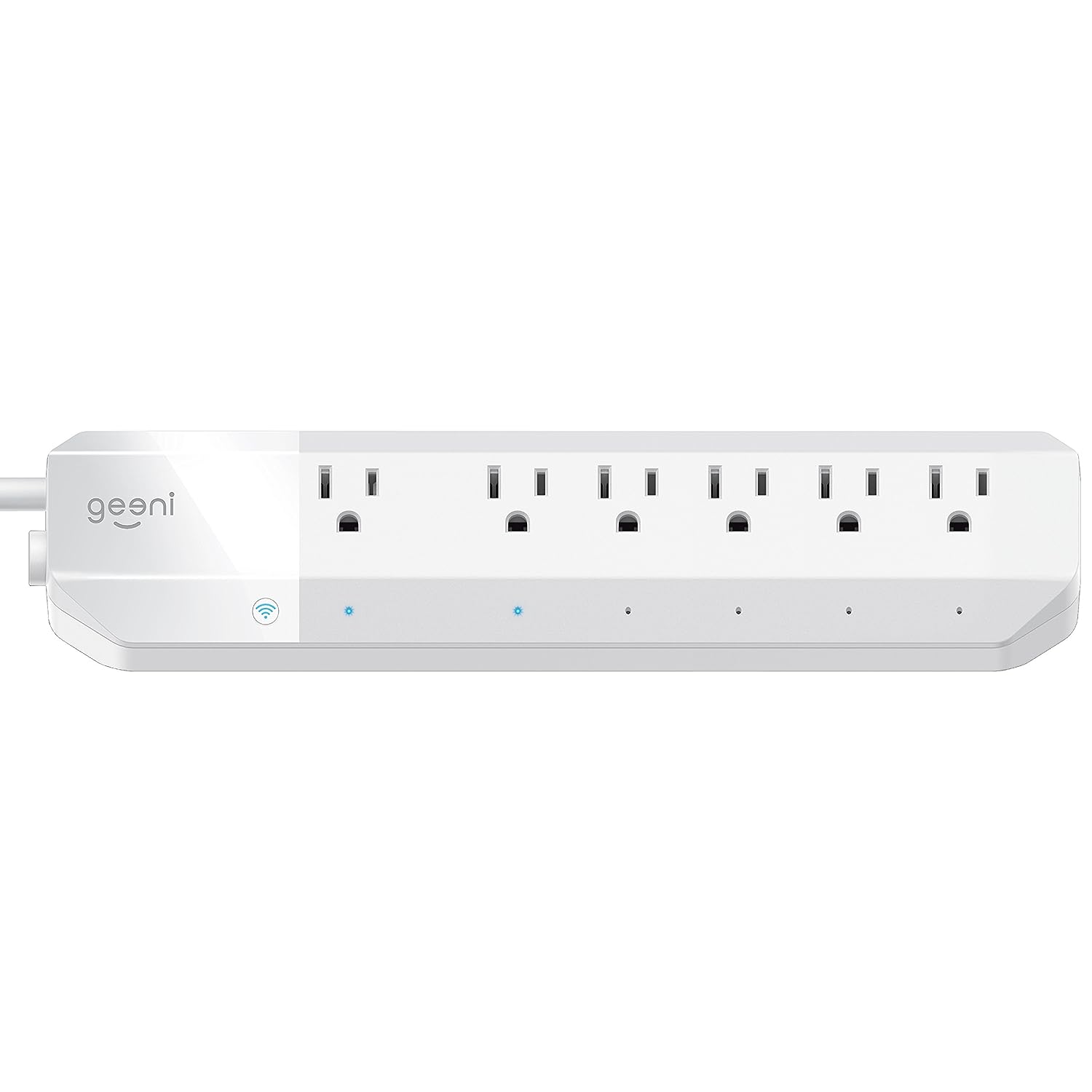 This unit allows you to program/name the individual outlets, and each of them has an indicator light. There are no USB ports, which is a shame because the only thing we’d plug into this unit would be a cell phone because the joule rating on this one is so low. Another issue we have with this one is the configuration of the outlets themselves. It’s a small compact unit and only one of the outlets is spaced far enough away from the others to allow anything with an adaptor or bulky plug to be plugged into it. However, it’s pretty reliable and for the price, it gets the job done — as long as it’s connected to Wifi. 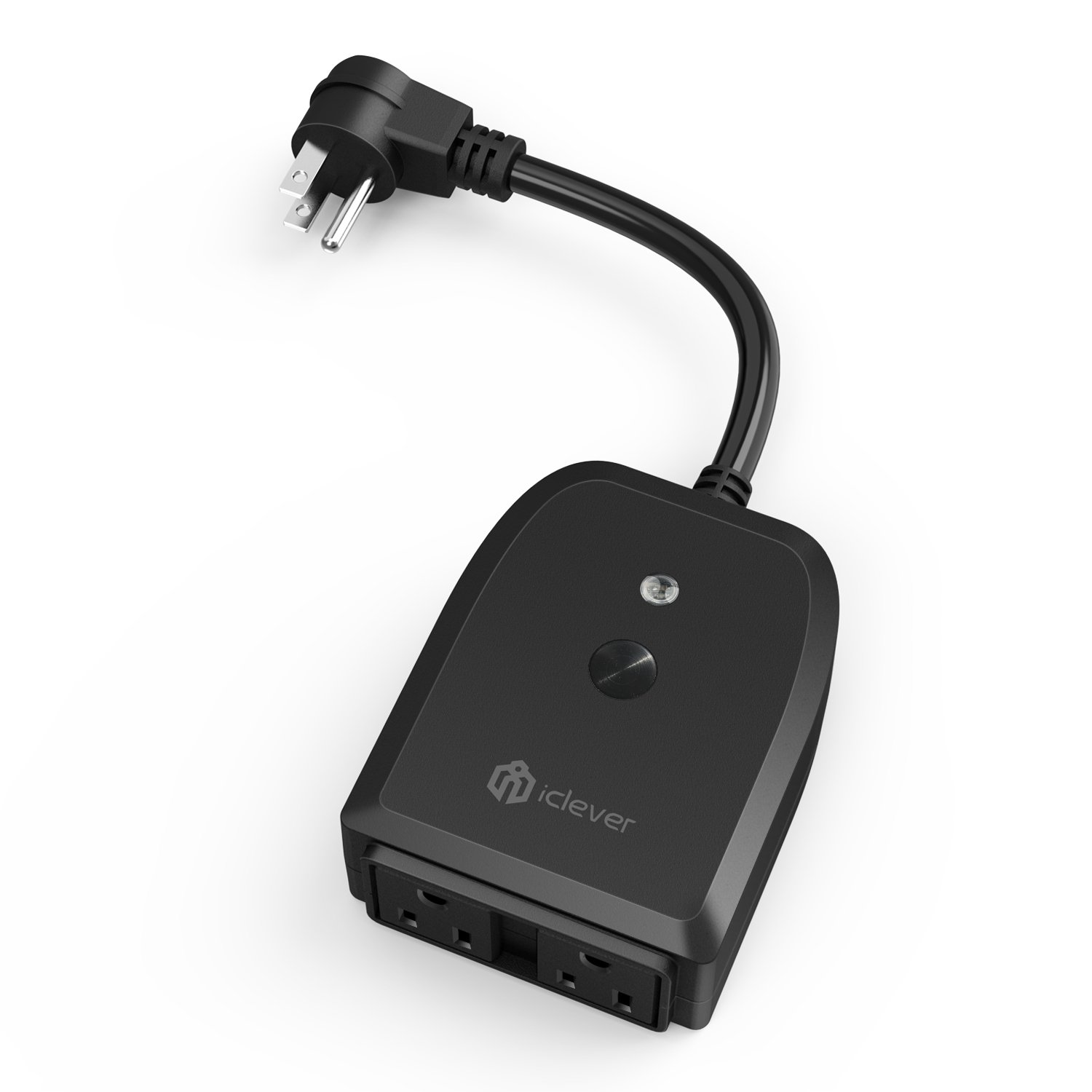 We really wanted to like this compact little device, however, it does not hold up as well under wet weather conditions or around water features as advertised. Both outlets are controlled together, not separately. The app is not user-friendly and frustrating to use. Does not stay connected to the internet and only 2.4GHz connections are supported. We’d probably not use it for much more than an outdoor Christmas or garden light feature. 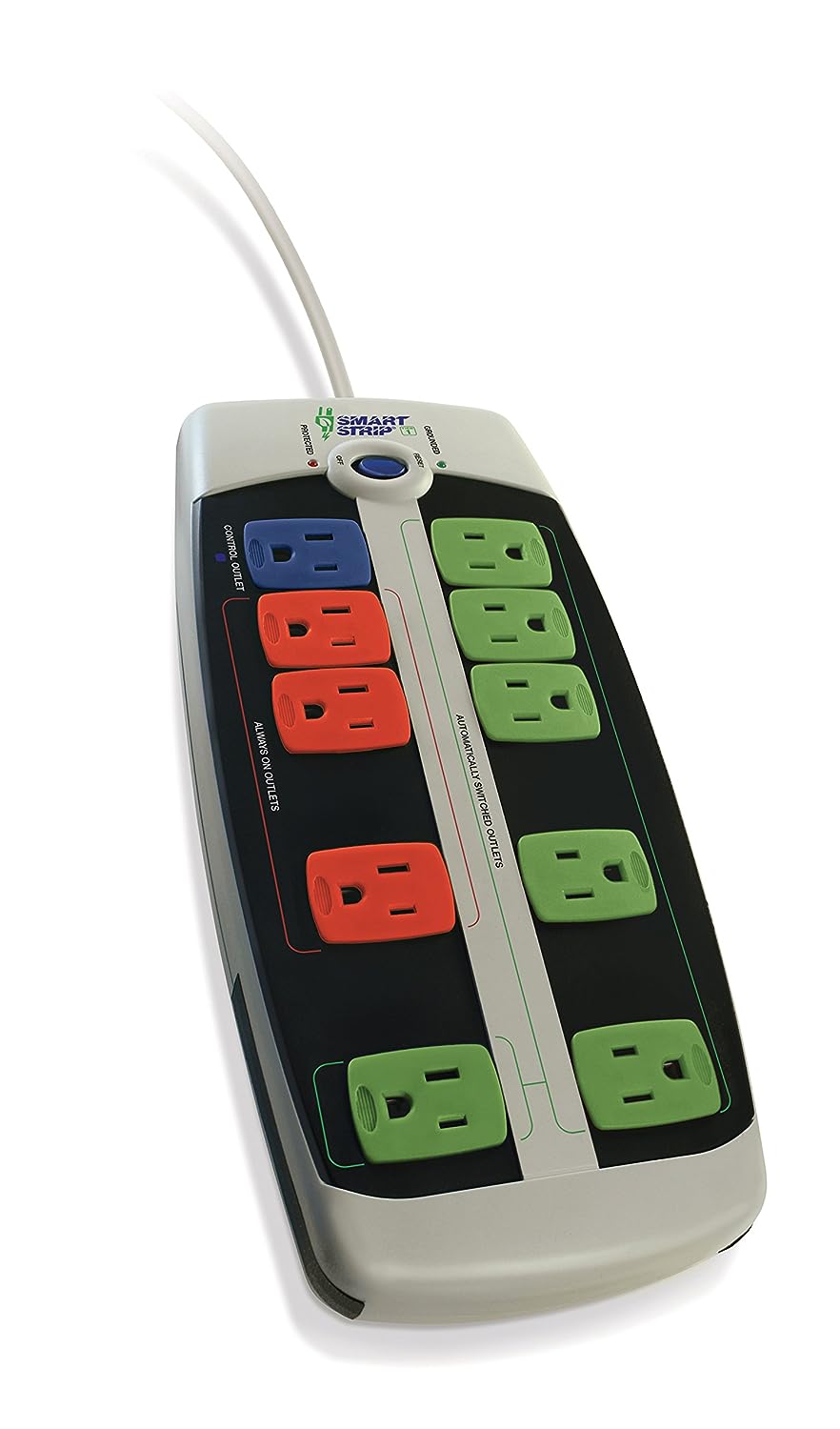 This is an example of a smart surge protector without the Wifi function. It will still detect power levels of the device plugged into the main (blue) outlet and power down all the others when that device goes into sleep or idle mode. It has a high joule rating. Unfortunately, this item does have some quality control issues with the sensitivity of the main outlet not always working as well as it should. Some devices’ power consumption does not noticeably drop when they go into idle mode and that could be affecting its performance.

How to Choose a Smart Surge Protector

There are two primary components of smart home technology: Wifi (wireless network) and electricity to keep it all connected. Many of us have multiple devices that plug in to power strips or surge protectors as a way to expand on the existing outlets in our homes. Convenient, yes, but unless you switch off the entire power strip or surge protector as soon as you are done using whatever is plugged into it, your devices will continue to draw power- even when turned off or on standby mode. Once cable management is finished for a home office or home entertainment system, most homeowners aren’t thrilled to be rooting around behind a desk or television console to turn their power strip surge protectors on and off. So your items stay there plugged in, consuming energy and money. This could account for as much as 10 to 25 percent of your home’s energy consumption.

Surge protectors are typically a block of outlets plugged into a single wall plug. They are more than just a power strip- they are designed to block or “clamp” excessive voltage when it reaches a certain point where it can damage what’s plugged in. Alternating Current (AC) typically is delivered to most outlets in residential properties at around 120 volts. At times it can cycle higher or lower, and extreme surges in voltage can occur. They’ll essentially fry unprotected electronics. The rating for a surge protector is measured in joules- how much extra electricity it can absorb. A higher number of joules means a greater capacity to absorb electricity. A higher-end surge protector may be rated around 5,000 joules. This can definitely help your AC outlets.

Enter the smart surge protector. These devices combine the convenience of smart technology with protection against power surges and spikes. They allow you to conserve power and keep the devices that need to always stay on powered up while shutting off power to components that do not require continuous power.

When most people think of “smart” technology they think of devices that connect via Wifi. These devices allow you to turn the power on and off using an app or central hub. Some surge protectors are marketed as “smart” but they do not connect to wifi. These surge protectors are just set up to detect the level of power consumption of the device plugged into the main outlet and power down everything when that device’s consumption level drops below a certain point. For the sake of this review, we’ve only reviewed surge protectors with the wifi capability, and just one that does not have the wifi capability.

Do You Even Need a Smart Surge Protector?

Think about the number of devices you leave plugged in. If you don’t own a lot of electronic devices that stay plugged in continuously, such as an elaborate home entertainment system or a home office set up with computer, printer, and more, it may be more trouble than it’s worth to program every outlet on a power strip when you’d override shut it all off anyway. Are your devices going to be damaged by repeatedly being shut off and turned on?

Most smart surge protectors rely on the use of an external central control device such as Alexa, Google Home’s Nest or an app- a program on your cell phone or tablet used to control, monitor and program the device. If this is not the level of integration you want to attempt in your home, you may want to consider a smart surge protector that does not rely on additional devices to utilize it.

There are several other considerations for utilizing smart surge protectors in your home. As of the writing of this article, there are not many devices with an acceptably high joule rating and also wifi capability. For the homeowner utilizing a wifi network to control devices in the home, security should of the utmost concern. As you design your smart home, always consider if any of the items on the network will be weak points.

If you only need to manage a couple of items, smart plugs can be great alternatives and will switch off the power at the wall. Keep in mind that brands like Belkin and Tripp Lite have great surge protectors for your home, but they do not offer smart capabilities. It all depends on what kind of integration you are looking for.

A smart surge protector will typically have one or more outlets on it that are always powered on, eliminating the need to reprogram devices such as televisions or alarm systems that need continuous power. The rest of the outlets will power down when the unit detects that the primary device plugged into it is in standby mode. This can be done in several ways- by a USB cable connected to your computer, motion detector smart power strips, or voltage sensitivity.

USB ports may continue to be powered by some computers even after the device has shut down so these may not be as effective.