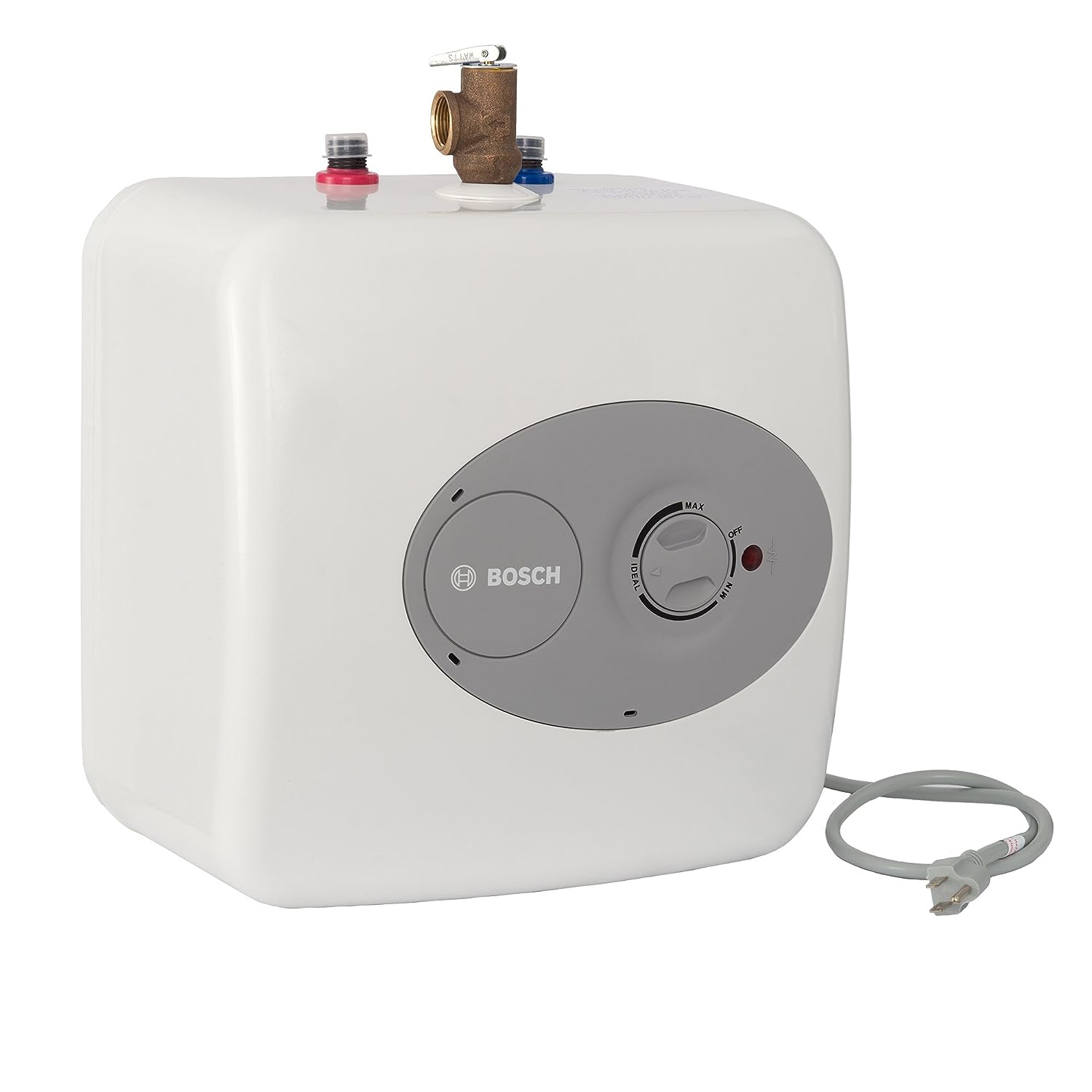 After looking at its individual features, we gave the Bosch Tronic 3000t a final grade of 8.8/10. First and foremost, the Bosch Tronic 3000t is noteworthy because it can be installed just about anywhere. Its squared form factor allows it to slot in comfortably beside other in-home appliance, while its internal architecture allows it to be mounted either horizontally or vertically.

All in all, the Bosch Tronic 3000t provided quality across the board; in terms of its core specifications, it shone brightest when examining its price, warranty, and energy efficiency rating. A 98% energy efficiency rating is almost unheard of in a compact model such as this, making its under $250 price tag and 6-year warranty a true bargain that homeowners shouldn’t pass up.

All these considered, the Bosch Tronic 3000t rightfully deserves our award for Best Tankless Water Heater under $250 with Flexible Installation Options.

Read more about our how our ratings broke down for the 3000t below or checkout how it compares to other point of use electric water heaters.

Those looking to install their tankless unit in a tight space (such as an under sink cabinet) should be mindful of their desired model’s dimensions. A tankless unit’s physical size and spacing can have an exceptional impact on its safe operation and maintenance down the line (though size won’t impact a unit’s capacity because tankless units don’t store any water internally). The Bosch Tronic 3000t shouldn’t be a problem on this front due to its compact 10 x 10 x 16 inches dimensions.

Choosing between an electric, natural gas, or propane powered unit may seem challenging at first. But no matter what, you should always choose the model that makes use of the most regionally affordable fuel source. For many, an electric unit like the Bosch Tronic 3000t will be the financially prudent pick in this domain.

A tankless unit’s flow rate describes how rapidly a volume of water passes through its system in a minute. Measured in gallons per minute (GPM), a unit’s flow rate can directly impact an outlet’s peak water pressure (PSI) if it is dips or fluctuates often. The Bosch Tronic 3000t’s 7 GPM rating, for example, is powerful enough to maintain a 150 PSI peak water pressure.

A tankless unit’s heating capacity describes the range of temperatures at which its heating chambers can output water. As such, this metric is often used to evaluate how capable a tankless unit is of accomplishing its core task. The Bosch Tronic 3000t is very capable in this category, with a heating capacity of 65°F – 145°F.

Many folks seek out a tankless unit based upon their reported energy efficiency. As such, most models communicate how much of their input fuel is converted into heat (as a percentage). This, in turn, can be paired with regulatory certifications to back up their legitimacy. The Bosch Tronic 3000t carries a 98% thermal efficiency rating – an impressive feat for such a compact unit – without any supplementary certifications.

When it comes to tankless units, you’ll be able to find more competitive pricing than in the tank water heater market. As such, home renovators can switch to a tankless system on almost any budget. Each Bosch Tronic 3000t unit costs under $250, making it very affordable considering its built-in capabilities.

Generally speaking, most tankless water heaters make use of either an analog or a digital display in order to facilitate user interactions. The Bosch Tronic 3000t is a prime example of a user-friendly analog interface, though many still prefer digital interfaces.

Another key consideration when choosing a tankless water heater is coating material. The Bosch Tronic 3000t makes use of some particularly durable components that allows it to far outlive many of its tankless competitors. For example, the Bosch Tronic 3000t’s Magnesium anode rods are not prone to corrosion, even in a hard water environment. In the same vein, this model’s glass-lined tank ensures that rust never takes hold inside the unit’s most critical components.

Decentralizing your water heating system can really change how you think about this critical in-home utility system. For example, a decentralized water heating system is far easier to maintain due to its modular nature. In the same vein, a decentralized system allows for instantaneous, often limitless hot water production that can keep up with demand without ever running dry due to each unit’s proximity.

Tankless water heaters are among the most productive ways today’s homeowners can slash their utility usage and their utility bills in turn. Many units, like the Bosch Tronic 3000t, include built-in components that manage both water and fuel intake when demand is high (in order to prevent waste on either front). Tankless units also (as their name implies) lack a tank, meaning that they don’t waste electricity maintaining an internal volume of hot water.