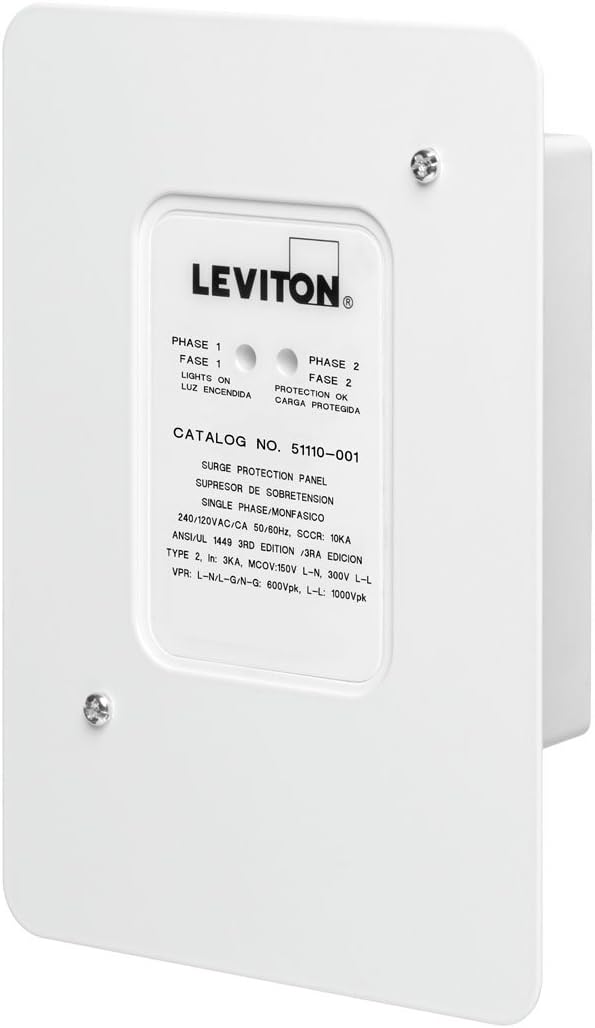 Most of today’s surge protector manufacturers have taken to up-charging their leading models simply because they’ve added an upgrade or two. Not so with Leviton and their 51110-SRG model. This unit costs only around $40 and comes with a variety of productive features, including a NEMA 4x enclosure that can safely operate at between -20° C to 85° C while still resisting rain, dust, and ice.

Meanwhile, this model is fully DHC Power Line Carrier compatible while still managing to resist voltage swells caused by surges of up to 26,000 amps. Also, this model can be mounted flush without the need to purchase a special kit, making it easier to install outdoors at your own discretion. Finally, the Leviton 51110-SRG makes use of separated surge suppression indicator lights that make it easy for even a novice user to know their whole home’s current protection status.

As a drawback, though, the Leviton 51110-SRG does not include many of the most important specifications in its current listings. As such, prospective buyers who want to comparison shop for the best option to meet their home’s needs may want to pass on the Leviton 51110-SRG.

Read more about our how our ratings broke down for the 51110-SRG below or checkout how it compares to other whole surge protectors.

Why Did It Earn this Score? –  To put matters lightly, we are rather disappointed in Leviton’s method of communicating MCOVs to its prospective buyers of the 51110-SRG model. To be specific, we can hardly believe that this model operates a 150 amp MCOV across all three of its modes of protections. Either way, Leviton’s lack of specificity in the domain makes it all but inevitable that they would lose points here.

Why Did It Earn this Score? – Here again, we struggled to isolate the Leviton 51110-SRG certified VPRs. We can see why Leviton may have tried to hide these specifications, though, because they appear to only clock in at a measly 400 and 600 amps respectively. Leviton doesn’t specificy which modes these VPRs correspond to, but regardless, they are rather meager for a unit that is expected to be installed outdoors.

Why Did It Earn this Score? – For a model that only costs around $40, we were fully surprised to see that the Leviton 51110-SRG offered three differentiated modes of protection. Accordingly, prospective users will have the opportunity to use L-N, L-G, and N-G modes while working to install and operate their new surge protection system. Each mode also operates with an equal degree of efficiency, ensuring that you don’t lose out on protection capacity based upon your chosen mode of protection.

When it comes down to it, we can’t help but feel a little let down by the Leviton 51110-SRG. While it certainly performs well when it comes to durability and value, it’s difficult to say with certainty that it can meet its 26,000 amp protection capacity due to its lack of quantitative specifications. As such, those who choose to use the Leviton 51110-SRG should do so only after they have ensured that they can make full use of its 5-year warranty.