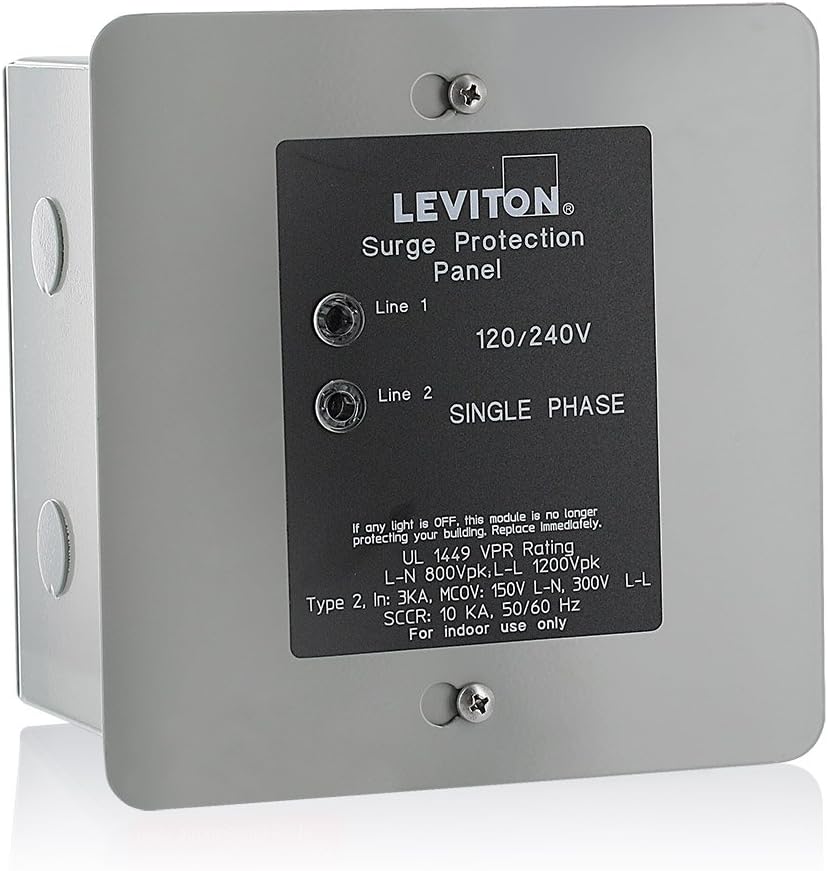 First and foremost, you should know that the Leviton 51120-1 has become the go-to choice for homeowners who possess numerous sensitive electronics across their property. That’s primarily because this model’s excellent VPRs are able to protect LCD TVs, PDAs, computers, entertainment systems and more from surges of up to 50,000 amps. That alone is a noteworthy accomplishment, even if this model does cost a bit more than average at around $130.

Next up, the Leviton 51120-1 has gained some amount of recognition for its use of a powder coated metal enclosure that carries a NEMA 1 rating. While this certification usually only qualifies an enclosure for safe indoor use, a variety of current Leviton 51120-1 have demonstrated that this model’s construction can withstand light outdoor wear. Regardless of where you choose to install, this model’s standard J-Box construction (which includes pre-punched standard knock-outs) can be mounted flush on most walls.

In terms of core performance, the Leviton 51120-1 contains precisely the right components needed to reliably achieve its 50,000 amp maximum capacity. In fact, this model makes use of a single, high-energy, solid-state semiconductor that is able to maintain the unit’s internal suppression circuitry even when dealing with a series of small surges. The use of this component, as well as its ability to operate without heating up, has allowed this model to also receive a V-2 rating for flammability.

Also, we would be remiss if we didn’t bring up this model’s warranty. While Leviton does include a 5-year, $25,000 downstream warranty with the 51120-1 model, current and former users have attested to the difficulty of actually registering a claim through this warranty. Even so, the majority of users were pleased with the Leviton 51120-1’s performance and never needed to use this warranty in the first place.

Read more about our how our ratings broke down for the 51120-1 below or checkout how it compares to other whole surge protectors.

Why Did It Earn this Score? – All things considered, Leviton hasn’t gone out of their way to distinguish the 51120-1 model when it comes to MCOV. That’s because this model only provides the two basic 150 volt (L-N) and 300 volt (L-L) MCOVs that make up the current industry average. Though this average is not a negative on its own, this model’s $130+ price tag makes it almost inexcusable that Leviton would not offer more in the MCOV department. We can only hope that upcoming remakes of the Leviton 51120-1 take a positive step forward in this domain.

Why Did It Earn this Score? – When we first looked over the Leviton 51120-1’s specifications, we were feeling down about the fact this model only included two VPRs. But after looking closely, our mood turned right around because the Leviton 51120-1 provides an 800 volt and 1,200 volt VPR for its L-N and L-L modes respectively. As such, homeowners with a variety of sensitive electronics can opt for the lower VPR option while homeowners with an assortment of heavy-duty electric-powered appliances can rest assured that this model’s high VPR mode will allow an ample volume of electricity through during a surge event.

Why Did It Earn this Score? – If the Leviton 51120-1 has any major heel, it can be found here. That’s because the Leviton 51120-1 only provides two basic modes of protection – L-L and L-N. While these modes are very practical for use in a variety of whole home surge protection set-ups, it is still disappointing that a model that costs around $130 couldn’t offer even one more mode of protection. If you were hoping to install this model in N-G or L-G, you’ll be fresh out of luck until Leviton decides to reengineer the 51120-1 model with full functional customization in mind.

If you stumbled upon the Leviton 51120-1 during your research to find a new whole-home surge protection option, then chances are that you also noticed the Leviton 51110-SRG. Indeed, both models even show up next to one another in a variety of online retail listings. But just how similar are these two models? Can they provide your home with an equal degree of surge protection?

Even though its aggregate score isn’t stellar, the Leviton 51120-1 is still a fully worthwhile option when it comes to protecting your home from an unexpected power surge. This model provides a great capacity to protect mid-sized homes from surges of up to 50,000 amps, which more than justifies its higher-than-average price tag around $130. After factoring in this model’s use of a solid-state semiconductor and an internal DIN rail module, you can see why so many current users consider this model to be of great value.

On the downside, though, this model’s 5-year warranty has been known to give some owners a hard time. Also, this model’s use of only two modes of protection really causes it to lag behind more capable options in its price range. But those issues aside, you can certainly count on the Leviton 51120-1 to perform most, especially when it comes to protecting your whole home’s sensitive electronics.