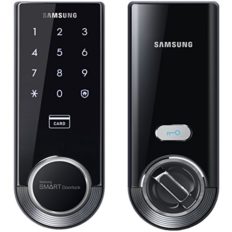 On the whole, the Samsung SHS-3321 digital lock earned a 5.3/10 average weighted score.

While that’s a fairly low score, it’s still a good lock for those who don’t have a smart home system or aren’t concerned about connecting their smart lock to other smart home devices, and don’t care about controlling a smart lock through a smartphone.

In other words, it’s a good lock for someone whose only desire for a smart lock is the ability to lock and unlock the door without having to use a key.

This is not a great lock, however, for rental property owners as there is no automated way to track codes or lock usage since the smart lock doesn’t come with an app and can’t be controlled remotely.  You are also unable to create temporary or time-bound access codes.

Be aware of the lack of customer support for this lock in the United States if you are interested in purchasing it.

For more information about the Samsung SHS-3321 digital lock, you can go to the manufacturer’s website.

This one’s pretty easy to use—you can either enter a passcode or use an RFID card/fob.

Access code entry is pretty straightforward and worked well the majority of the time.

It should be noted, however, that while you can add up to 70 users (split between access codes and RFID cards), the only way to keep track of those users is via a paper log included with the owner’s manual or something like a user-created spreadsheet, since there is no app for this lock and no smartphone capability.

So while most smart locks that allow for a large number of users track this data for you in an app or online, you’re on your own here to manage everyone who has an access code, and every access code or RFID card you delete or disable.

Because there is no remote access since the smart lock isn’t Bluetooth or wi-fi capable and doesn’t work with Zigbee or Z-wave (plus) devices, the only way to interact with the lock is at the lock itself, although this could be seen as a positive for some users.

On the plus side, if the batteries should die on you, there is a battery back-up system on the lock’s exterior.

In addition, the manufacturer’s website gives bare-bones information about this lock, and the owner’s manual doesn’t tell you that much more.  This lack of information is evidenced by the more than 300 user-answered questions on Amazon.com, so be aware of that if you choose to purchase this lock.

It has also been noted by multiple users that customer service can be unresponsive or slow to work on resolving issues.

For those reasons, we gave the Samsung SHS-3321 digital lock a 7/10 in the ease of use category.

Which systems is this smart lock compatible with?

If you’re looking for a lock to integrate into your existing smart home hub or to work with other smart devices, this is not the smart lock for you.

Because this smart lock isn’t compatible with any smart home systems, but does have a built-in fire alarm and auto-unlock if the alarm goes off, it gets a 2/10 here.

Once you remove the old lock, there’s an online video you can follow to install your new smart lock, or you can use the written instructions in the user’s manual.

There are only a few steps, which we list below to help you make your buying decision.

While there aren’t that many steps, the installation process is a little more involved for this smart lock than for many of the other locks we’ve looked at, and several users reported that it was difficult to install using the available written and video instructions.

The only caveat, which is the same for all smart locks, is to be sure that your door is aligned properly so the hole for the deadbolt lines up with the deadbolt.  Otherwise, you may have issues with the deadbolt not going in properly, jamming, or getting stuck in a locked position.

This is a one person job, which is good, but if you run into difficulties, you may be out of luck, as users reported issues with getting any type of support from the manufacturer or sellers.

For those reasons, this lock gets a 7.5/10 on ease of installation.

Robustness of the App

This is one of the very few smart locks we encountered that doesn’t have an app, since it is not pairable with a smartphone or controllable via internet, smart device, or smart home hub.

Because you can only interface with the lock using the touchscreen on the lock itself, and there is no app, the Samsung SHS-3321 digital lock gets a 1/10 in this category.

How this smart lock opens the door

Interestingly, this lock uses an RFID card and RFID fob as one method for unlocking the door.

You can also enter a code in the touchpad to get in.  There’s an additional security feature that will light up two random digits for you to press prior to entering your access code, so others won’t know exactly which numbers are in your code.

Note, however, that the way the door lets you know if it’s successfully unlocked sounds almost exactly like the way it lets you know the attempt was unsuccessful.

A series of doorbell-like sounds (“ding dong dang dong” or “ding dong ding dong”) indicate whether you have successfully unlocked the door or have failed to unlock the door.

While being a clever idea, it’s not easy to distinguish between the two sounds, especially for the hard of hearing.

There is no physical key for this lock.

Because there is no back-up key, but there is a back-up battery system, and there’s no true remote access or smart home integration, the Samsung SHS-3321 digital lock gets a 6.5/10 in this category.

This lock retails for around $183.  That’s about average when compared to other smart locks.

You do have some nice features with this lock, such as the tamper alarm, 9-volt battery back-up on the outside of the lock, built-in fire alarm, and randomly generated false digits that thwart anyone who may be trying to get in.

However, the fact there is no smart home integration and no ability to connect to Bluetooth or wi-fi is fairly disappointing, especially since so many other smart locks offer these features for around the same cost.

And because most smart lock buyers expect to have the ability to control, or at least check the status of, their lock through their smartphone, this lock is bypassing a large section of potential users.

Because the lock offers some nice features, but doesn’t integrate with Bluetooth, wi-fi or any smart home systems/devices, and there’s no ability to access the lock with a smartphone, we gave it a 5.5/10 in the value category.

Wi-Fi, Bluetooth, or Both?

This smart lock does not have any remote access capability.  It is not Bluetooth capable, and is not compatible with Wi-Fi, Z-wave (plus), or Zigbee.

Samsung makes other smart locks with other capabilities, but the SHS-3321 cannot be controlled via smartphone or through any other smart device or hub.

The only way to access the lock is by being in front of the lock.

Because there is no remote use capability, we gave the Samsung SHS-3321 digital lock a 1/10 here.

The Samsung SHS-3321 digital lock is battery powered, and takes four AA batteries, which should have about a ten-month lifespan according to the manufacturer.

The lock is designed to play a specific song each time the door is unlocked if the batteries are low, which is a new one for us.  No other smart lock we’ve seen uses music to alert you it’s time to change the batteries. While unique, this could easily get annoying.

There is also a red flashing button that will let you know the batteries are low, but there doesn’t appear to be any way to disable the song function of the low battery feature (although you can mute the volume).

However, there’s also a 9-volt battery terminal on the outside of the lock to charge the keypad if the batteries die.

We balanced the cost of replacing 4 batteries at once (and the frequency of replacing the batteries) against the emergency battery back-up and low-battery warning feature on the lock, and gave this smart lock an 8.5/10 in this category.

This is a complete locking system and comes with a full deadbolt assembly.  This is considered to be the safest type of smart lock when compared to those that simply attach to an existing lock.

Because of the fact that it’s a full locking system, we gave the Samsung SHS-3321 digital lock an 8/10 here.

This smart lock does not have a place for a physical key, although it does have an external battery back-up in case the batteries die.

This means your only options for getting in are with an access code or the RFID card/fob, since there is no way to remotely control the lock, and you cannot use a smartphone to unlock the door.

We gave this lock a 6.5/10 for only offering two keyless entry options (both must occur at the lock itself) but having a battery back-up system.

This lock comes with a one-year limited warranty on the materials and workmanship.

This is the lowest warranty available on smart locks.

Because of the lackluster warranty, the Samsung SHS-3321 digital lock earns itself a 6.5/10.

The Samsung SHS-3321 digital lock is the only lock we’ve seen with a built-in fire alarm and auto-unlock feature if the alarm is activated, allowing you to quickly exit in case of a fire-related emergency.

It also has an alarm that’s designed to go off if someone attempts to tamper with the lock, which is a nice added bonus.