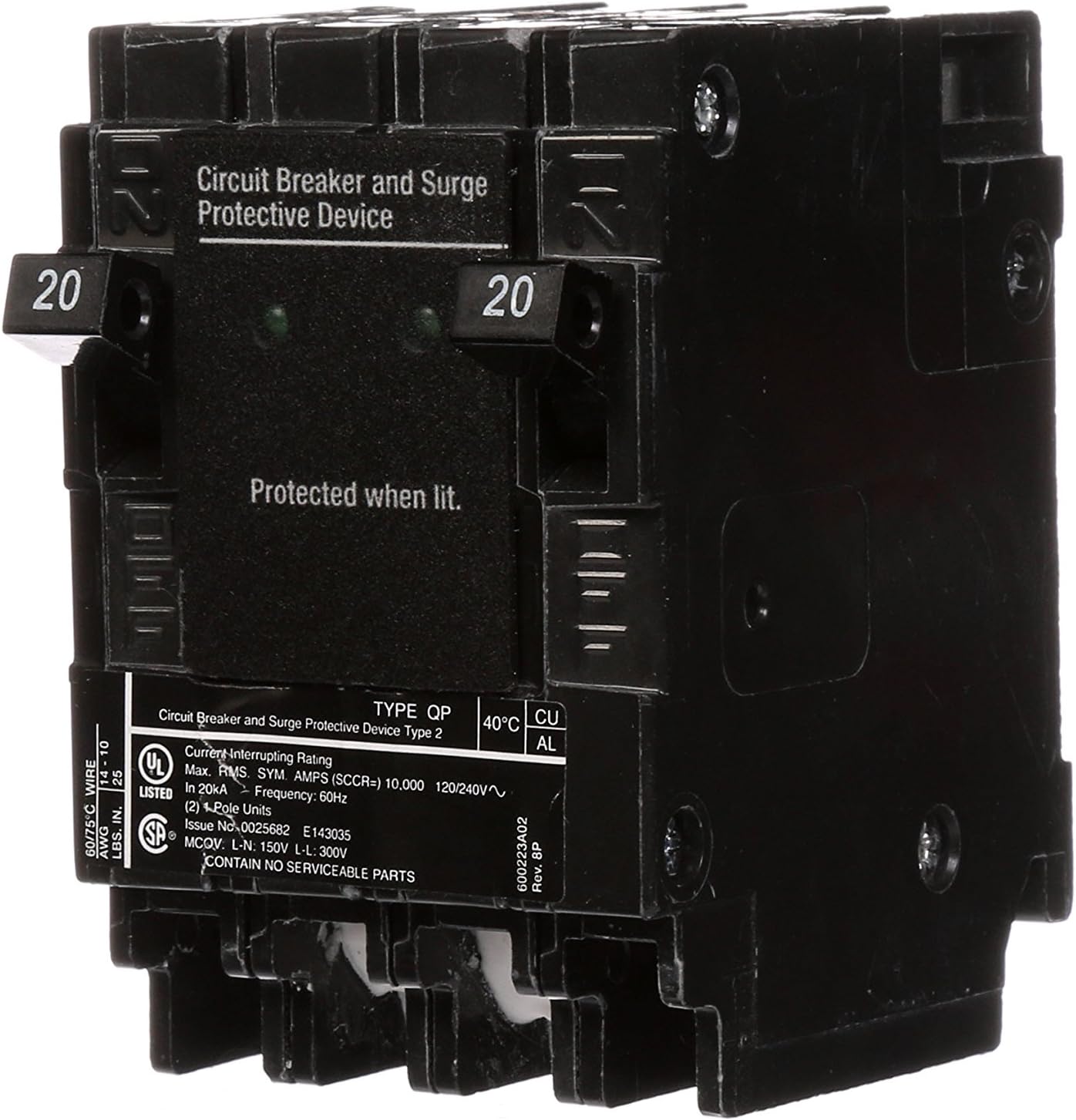 When you first see the Siemens QSA2020SPD, you might take notice of its unusual, case-less exterior. While it may not be the most aesthetically pleasing surge protector on the market, it still manages to accomplish its primary task of protecting your home’s critical electronics. This model manages to accomplish this goal by utilizing to auxiliary circuit breakers that act as a first line of defense against up to 40,000 volts of electricity directed towards your inline circuit system.

Despite its pared down exterior appearance, the Siemens QSA2020SPD really has a lot going on under the hood. For example, this model makes full use of several proprietary 40mm metal oxide varistors, each of which have been explicitly designed to remain intact and fully functional when handling the charge from a lightning strike. Meanwhile, this entire unit has been tested to operate successfully at up to 40° C, which is substantially hotter than even most outdoor installation environments will require.

If the Siemens QSA2020SPD excels in any one category, it would certainly be its use of durable internal components. In fact, you’d expect this model to cost twice as much due to its use of a newly-designed metal oxide varistor set. But as it turns out, this model manages to pack in a great deal of extra value by including these components while still receiving both a UL and CSA certification.

Read more about our how our ratings broke down for the QSA2020SPD below or checkout how it compares to other whole surge protectors.

Why Did It Earn this Score? – Generally speaking, this model’s 500-volt MCOV is good enough to meet the needs of most homeowners. However, folks looking to fully optimize their full home surge protection systems may find that this unit barely makes it over the 15% excess threshold recommended by most experts. Altogether, though, this surge protector is not prone to catching fire, even when operating for a lengthy period of time at this MCOV rating.

Why Did It Earn this Score? – Smaller surge protection units tend to suffer from lower VPRs. Not so with the Siemens QSA2020SPD, which provides up to 1,000 volts of protection when it is properly installed and fully engaged. As a result, you’ll likely be able to count on this model to fully protect several critical in-home appliances from frying in the wake of a serious power surge.

Why Did It Earn this Score? – This surge protector is unique because it does not rely on specific modes of protection. Instead, this model directly interacts with your existing circuit breaker and provides two spare breakers to act as protection for your permanent system. While this may not be useful for all homeowners, those looking for a reliable (and affordable) method of protecting their essential in-home electronics should be able to use this model without much trouble.

Taken together, the Siemens QSA2020SPD is a worthwhile purchase. While it may not excel in every specification, its sub-$100 price tag is undoubtedly enticing to the budget-conscious DIYer in all of us. Also, this model’s lack of user-friendly alarms or lighted notifications is compensated by the ease with which new fuses can be installed after an in-home power surge. In short, if you’re working on a budget and are willing to put in a little extra work to manage your in-home surge protection, then this model is for you.