Homeownership matters. For most, it represents stability and the desire most people have to have their own space. The purchase of a home and the formation of a household often coincides with marriage and birth of children. Homeownership is even more important to families. Parents want a safe, comfortable environment where they can nurture and raise their children.

There are considerable, very tangible social and economic benefits to regions with high rates of homeownership. Increased civic engagement, lower crime rates, better schools, and healthier populations tend to coincide with high homeownership rates. Properties tend to have fewer serious housing issues, and in healthy neighborhoods, distressed properties tend to be unusual and vacancy rates low. The likelihood of homeowners’ children purchasing their own homes increases ten percentage points over those that grew up in renter households. Homeownership offers an excellent opportunity to build wealth. The median net worth of a family in an owner-occupied home is almost always significantly higher than the net worth of renting households. 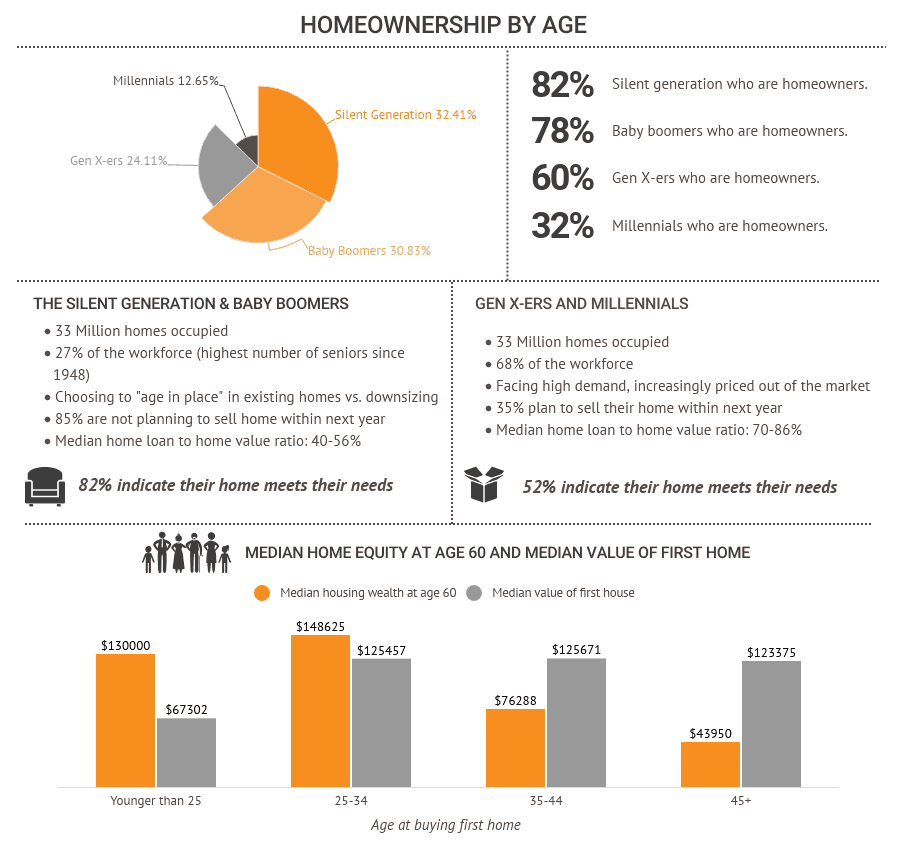 In spite of all of these benefits, American homeownership rates have plummeted. Gains were made in 2016, but the rates have gone back down again. This does not necessarily reflect a trend of home buying preferences, rather lingering outcomes from the collapse of the housing market in 2007. If consumers could choose, most would prefer to own a home or have the option available to them in the future. Over 70% of prospective homeowners of all ages have consistently indicated homeownership is part of their dream. However, younger generations are becoming increasingly disillusioned with the idea of homeownership. The percentage reporting homeownership as a goal declined from 80% in 2015 to 71% last year.

These numbers do take into account that Americans 35-year-olds and younger are less likely to own a home anyway. Household formation and the purchase of a house often coincides with marriage or the birth of a baby. Those who are married are 18% more likely to own a home. Baby boomers tended to get married much earlier. In a report issued by the U.S. Census Bureau indicated most Americans think the ideal age to do so is age 25. The reality is that young adults today tend to wait longer to get married and have children. These major life events come much later in life or sometimes not at all for most millennials and Gen-Xers. Many of them formed households before getting married. In 2017, 16% of first-time homebuyers were young unmarried couples. Single adults accounted for 25% of first-time homebuyers.

Millennials represent a significant segment of the prospective homeowner market, and most are now at the age when historically, most adults formed households and purchased homes. Their rate for homeownership is 8% lower than homeownership rates for baby boomers and Gen Xers when they were the same age. According to the Urban Institute, if millennial homeownership had kept pace with prior generations, this segment would add over 3.4 million additional homeowners.

The last decade also saw an increased number of adults living with their parents. These individuals were usually not counted in studies as homeowners or renters. If this growing segment of the population had been included in surveys, homeownership rates in the United States might have been even lower.

Homeowners and Equity By Age

Strong growth in home values may prove a headache to prospective buyers, but for homeowners, it allows for the building of wealth by accumulating equity in the home. In markets where home values do not increase, it takes longer to pay off a home. The median home value in the U.S. has passed where it was before the recession, and in some areas has gone far higher.

The older generations in the United States (baby boomers and silent generation) have not only been in their homes longer, but they have also reaped the benefits of home values increasing over a much more extended period. Most of them have a home loan to home value ratio between 45% and 56%, meaning the median value of their homes are worth nearly twice what they may still owe on them. They were able to withstand the losses that occurred during the recession, remain in their homes, and gain even more equity on the other side. Many of the boomers and silent generation are also living “free and clear” of a mortgage. Additional equity is just icing on the cake. Nearly a third of the population in the U.S. owns their homes with no mortgage, and of this number, most are of the older generation.

Gen-X homeowners took the biggest hit during the Great Recession. In 2007, these prospective homebuyers and homeowners were at the same place millennials are today. A disproportionate amount of this age segment found themselves underwater on their homes- owing far more than the home was suddenly worth. The median home price decline was 22.9% but in some markets, was considerably higher. For those Gen X-ers who remained in their homes, the past five years of steep spikes in home values has allowed them to recoup and gain losses in equity.

Millennials who managed to snag a home before the home prices started to climb are also enjoying the benefits of a favorable market. Nearly 64% of millennials purchased their homes within the last five years, and have been able to accumulate equity in their homes rapidly.

There are considerable obstacles to homeownership. Younger prospective buyers are finding it harder to purchase a home than their parents did at the same age. Affordability continues to be the most substantial barricade to homeownership, particularly for the age group under 35 and first-time homebuyers. As home prices in the United States exploded in the last decade, the amount of money needed for a down-payment on a home has grown further out of reach for young adults. While the economy is growing and expanding, income growth has not kept pace with the steeply rising price tags on purchasing a home and obtaining an education. Interest rates are climbing again. Many of those prospective homebuyers have instead become renters. Rental units are still available, but they are increasingly also becoming very much in demand. Apartments are getting more expensive. Renting can keep a cost-burdened renter from being able to save for a down payment on a home.

Housing, both rental and owner-occupied, is as scarce as ever. In the second quarter of 2019, homeownership stood at 64.1%. Demand remained high with homeowner housing at a 1.3% vacancy rate. This number was 0.2 percentage points lower than at the same time in 2018. Rentals, on the other hand, were at a 6.8% vacancy rate, and the number had not changed much either since 2018. When compared to 2011, homeowner vacancy rates in the fourth quarter were 2.3%, and vacancy rates much higher at 9.4%.

In many of the nation’s hottest markets, things are beginning to cool off. As home appreciation across the country slows, optimism about buying a home is again rising. Nearly 40% of prospective American homebuyers indicated they planned to buy a home in 2020 or the year after, marking a 7% percentage point rise from 2018. Millennials are at the peak age to begin forming households. While most of this segment start off renting, many in this age group are now starting to transition to prospective buyers or homeowners.

This may continue to add demand to an already stretched inventory of housing. However, the housing supply may grow along with the economy. Optimistic real estate agents hope that older generations will continue to age out of their homes. And millennials’ increased interest in revitalizing distressed or nontraditional properties into housing will also result in more homes coming onto the market.

Other Age-Related Factors Affecting Homeownership in the U.S.

In addition to age, other wide-ranging factors surround the distribution of wealth across demographic groups in the United States. When calculating the net worth of a household, one of the single most significant assets is the equity in a homeowner’s property, followed by retirement accounts, stocks and bonds, bank accounts, rental properties, and business assets. Generally, the baby boomer and silent generation have been in their homes longer and have had the chance to build up more equity and security to weather the storms of the recent housing market crash. Younger homeowners, especially those who purchased their homes at higher prices, may not have the same rates of equity.

The cost of obtaining an education (which makes an individual more likely to attain a higher net worth) has also skyrocketed. The out-of-pocket cost of obtaining a college degree for baby boomers was far lower. Today, most students must incur staggering debt to pay for college. Student loans keep many prospective homeowners mired in the cycle of juggling debt while grappling with the high cost burden of renting. Student loan debts decrease the likelihood of homeownership, and among millennials, this number can be as high as 15%. Student loans comprise the second-largest segment of debt in the United States. Wages have not kept pace with the cost of education in the United States. It is no longer feasible to work through college to avoid graduating with debt.

The disparity of wealth between renter households renting and those who are homeowners makes a case for certain impediments to homeownership to be eased. At the same time, the mistakes and questionable, predatory lending practices that led to the collapse of the housing market with subprime mortgages. The median net worth of homeowners higher than that of renters’ median net worth. Purchasing a home with an affordable mortgage can be a positive step towards building wealth for individuals and families.