Recently, a lot of people have been exploring the opportunities offered by short-term rentals and booking sites. However, despite the growing popularity and potential profit of short-term renting, many individuals still have reservations about listing their units on sites like Airbnb.

Although the majority of short-term rental hosts are happy with their decision, there are still reasons to be reluctant, such as rowdy guests and property damage.

« Although the majority of short-term rental hosts are happy with their decision, there are still reasons to be reluctant, such as rowdy guests and property damage. »

Holly, an Airbnb host in Sydney, Australia, was looking to make some quick cash to pay off credit card debt. What better way to do that than renting her apartment out for 10 days? After her guest’s check-out, Holly went over to do a bit of cleaning. What she found was enough to make her wonder if she should ever rent her apartment out again.

Drugs and all kinds of paraphernalia were strewn across the unit, ash and cigarette butts covered the expensive carpet, and a mystery, green liquid sprayed the walls. Not only that, but the apartment had also been completely ransacked — every drawer and every room had been pilfered. All the guests left behind were the pungent scent of chemicals, a broken crack pipe, and blood-soaked towels. Holly’s guest and their visitors caused over $8,000 in damages.

Thankfully, most short-term rental hosts don’t have to deal with what Holly did. However, there are definitely certain risks to be aware of. To identify the most common forms of misconduct and the top concerns for short-term renting, we conducted a study with the help of Wakefield Research, a globally respected market research firm based out of Washington DC.

Our study results show that 36% of Americans know someone who has acted inappropriately during a short-term rental stay, such as hosting a disruptive party or using illegal drugs. For this reason, many people have doubts about becoming vacation rental hosts. In fact, 82% of Americans admit to being hesitant about leasing out their property as a short-term rental.

As mentioned previously, more than a third (36%) of Americans know someone who has engaged in wild antics during a short-term rental stay.

« More than a third (36%) of Americans know someone who has engaged in wild antics during a short-term rental stay. »

Sometimes tenants can get a little out of hand, especially considering that most short-term renters are also vacation-goers. However, a guest’s good time can turn into a host’s headache very easily.

The leading inappropriate behavior was hosting a rowdy party, with 19% of Americans saying they know someone who has. Other top forms of mischief included damaging furniture or appliances (16%), getting into a conflict with a neighbor (16%), and using illegal drugs or allowing someone with illegal drugs to visit (13%). 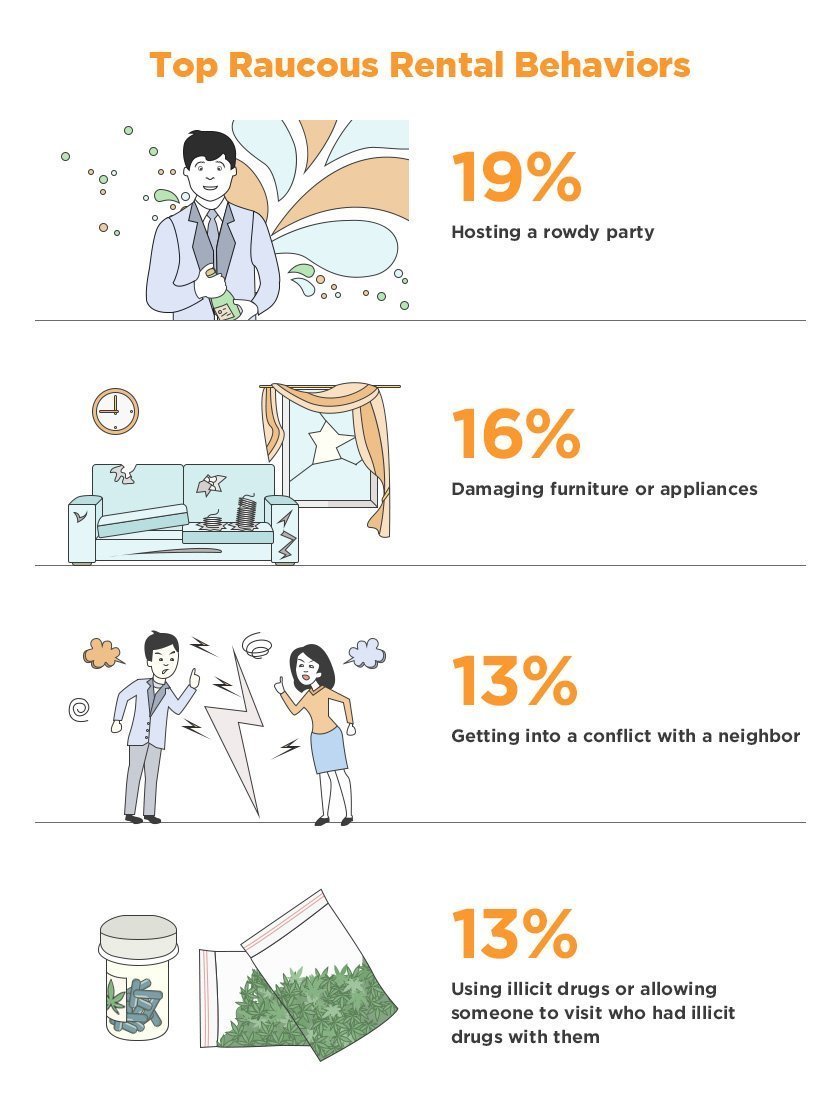 Note that someone trashing your home and stealing all your belongings is a very rare occurrence, but guests can still be disruptive. Screening tenants for short-term rentals is a bit different from long-term rentals, so it’s important to do your research. Depending on which listing site you use, you’ll be able to see information about your guest that will help you get an idea of who they are. You can always do a telephone screening and ask questions regarding the purpose of their stay, how many guests there will be if they have any pets, if they smoke, etc. Just make sure to always keep the Fair Housing Act in mind.

Risky renter behavior continually deters many people from enjoying the advantages of short-term rental ownership. 82% of Americans have hesitations about leasing out their property as a short-term rental. The biggest concern by far is simply not trusting strangers in their home (62%).

« The biggest concern by far is simply not trusting strangers in their home (62%). »

In addition, 30% of those surveyed claimed they wouldn’t have somewhere else to stay if they rented out their property. Other concerns included lack of permission from a landlord or homeowner’s association (17%) and potential judgement from neighbors (7%).

All of these are valid concerns, considering the possibility of something going wrong. However, many hosts are enjoying this innovative method of making money and providing guests with unique and fun experiences.

Weighing the Pros Against the Cons

While a handful of Americans are wary of becoming short-term rental hosts, many Americans also see the benefits of this new practice. Airbnb conducted a study in 2016 to determine Americans’ opinions on the company. Data shows that 76% of Americans think Airbnb provides the opportunity to meet and get to know people from other places. People also believe that Airbnb is an important innovation, with 69% of Americans claiming that it improves the way people travel.

There is also, of course, the alluring benefit of financial profit. 68% of Americans claim that Airbnb helps middle-class families afford their homes. In fact, nearly 13% of hosts from ten of the largest U.S. cities say their Airbnb income has helped them avoid eviction or foreclosure. Half of these hosts also say their short-term rental income has helped them afford to stay in their homes.

Managing these kinds of units requires a lot of effort and dedication, but the pros typically outweigh the cons. There is an endless list of opportunities with vacation rentals, and you can be sure that the experience will always be rewarding in some way.

« Remember that there are risks with anything and the majority of hosts are pleased with their experiences. »

Guests do misbehave sometimes, whether that means disturbing the next-door neighbor with loud music or breaking a knob off the stove, so it’s natural to be a bit worried about strangers staying in your home. Remember that there are risks with anything and the majority of hosts are pleased with their experiences.

The iPropertyManagement Survey was conducted by Wakefield Research among 1,014 nationally representative U.S. adults, ages 18+, between December 28, 2017 and January 4, 2018, using an email invitation and an online survey. Quotas have been set to ensure reliable and accurate representation of the U.S. adult population 18 and older.

Results of any sample are subject to sampling variation. The magnitude of the variation is measurable and is affected by the number of interviews and the level of the percentages expressing the results. For the interviews conducted in this particular survey, the chances are 95 in 100 that a survey result does not vary, plus or minus, by more than 3.1 percentage points from the result that would be obtained if interviews had been conducted with all persons in the universe represented by the sample.